Skip to content
IPTL World is reader-supported. When you buy through links on our site, we may earn an affiliate commission. Read more here.

Tennis is a sport with a ton of jargon and rules, which makes it confusing for a tennis player who is just starting.

While watching a pro tennis match, you may have heard the term let being called out by the chair umpire in the game.

So, what is a let in tennis? And why is it so important? Here’s an explanation in today’s article.

What Let Means in Tennis

The word let in old English history and origin is “a hindrance”, but it has an entirely different meaning in a tennis game.

You are going to hear let being called when a player is serving. It is called a let when the tennis ball touches the net, but it manages to fall into the service court on the first serve.

A tennis let is any instance wherein the tennis players have to replay an entire point (1), and it can be called for a number of reasons. However, it cannot be redone during a second serve.

If the tennis serve touches the net, but it lands on the server’s own side of the court, then it’s called a fault. If a server does a fault the second time, then the opposing tennis player gets the point.

If there is someone who is officiating the play, then the person can call a let. However, you or the opposing tennis player can call a tennis let if the officiating person is slow to call let.

If there is no official person, then you or the receiver can call let. However, both players can agree to have a no-let rule if you want a fast tennis match, but it does not apply to professional tennis tournaments. It’s a common rule for players in recreational tennis.

Instances When Let May Be Called in a Game

A service let happens in these three circumstances:

When the tennis ball touches the net, generally at the net chord above, and it falls in the correct box. A let is called in this instance.

When the tennis ball touches the net, and it makes contact with the opposing player or on the clothes they wear before it lands on the ground.

When the server hits the tennis ball, and the opponent is not yet ready. The service attempt may be repeated.

You’ll find the first circumstance the most common let in a tennis match, and it’s easy to detect as the tennis ball’s trajectory changes when it hits the net chord. Or there is an audible sound when the ball touches the net.

A rally let in tennis does not often happen in pro tennis because it is specifically set up to reduce distractions out of the athlete’s control.

On the other hand, it can be called a distraction that limits the player’s ability to keep up with the rally.

An example would be when you are playing in a multi-court complex, and the tennis balls from the adjacent court fall into the court while you are rallying. When it happens, all players can call a let to have a point redone.

A spectator movement can cause a distraction for the tennis player, which allows a let to be played. The umpire calls a let and replays the point.

How Many are Allowed?

Tennis rules state there are no limits as to how many lets are allowed for one point. The famous tennis player, Serena Williams, had four consecutive service lets.

In pro tennis matches, like in the French Open, the nets have microphones. In the instance where there is the slightest touch of the net, it is easily recognizable.

However, you are only limited to what you can see for a first serve in casual or recreational tennis. You can observe it by seeing a noticeably different speed in the first serve or second serve. 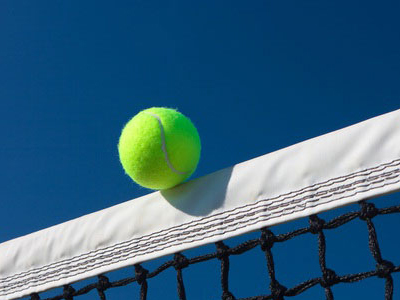 How many lets can I serve in a row?

You are allowed unlimited first let serves in a row. In tennis, you can only lose a point when the player serves two faults in a row.

Can you challenge a let?

No, you cannot challenge a let in professional tennis.

Does a let count as a fault?

No, lets do not count it as a fault. A service let is when the ball touches the net, and it falls into the correct service box, so the player has to repeat the serve when lets happen.

How many times can you let in tennis?

There is no limit on how many times you can let in tennis. As long as the tennis ball hits the net and goes into the correct service box, the point can be replayed.

A let in tennis is a little tricky to identify, especially during fast-paced matches. However, it’s easy to recognize a let during a professional-level match as microphones are fitted into the net.

In recreational games, you can have the no-let rule in play for faster games.

Remember: You can call a let many times in a row as long as it lands into the correct serve box.